The GSOFamilies Children's Costume Contest 2013 (the "Contest") is sponsored by GSOFamilies.com (the "Sponsor" or "Organizer"). 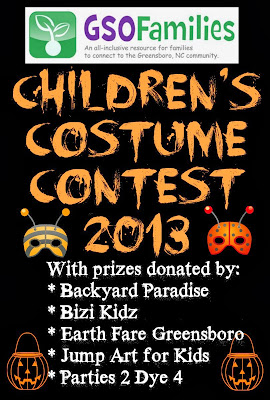 ONE (1) FIRST PRIZE:  8 weeks of classes from Jump Art for Kids!

ONE (1) RUNNER UP PRIZE: A bag of "healthy" treats from Earth Fare Greensboro! All candy is free of artificial flavors and dyes, and uses real cane sugar instead of filler.

All federal, state and local laws and regulations apply; void where prohibited.

ELIGIBILITY: The Contest is open only to individuals, 18 years or older at time of entry, who are legal residents of the United States.

TO ENTER: Submit a photo of your child in his or her costume for 2013. To enter electronically, visit http://woobox.com/rb4zkf. All information provided by entrant must be complete, true and correct. Submissions to the Contest must be received by November 2, 2013 in order to be eligible; entries received after that date will be deemed ineligible to win. All submitted entries become the property of Sponsor and will not be acknowledged or returned; Sponsor is not responsible for lost, late, inaccurate, incomplete, damaged, illegible, or misdirected entries. All entries may be published on the GSOFamilies.com web site, whether selected for a prize or not. Nothing in these Contest rules obligate Sponsor to publish or otherwise use any photos submitted in connection with the Contest. Each entry must be submitted on an individual basis (i.e., one child per photo) and all photos of the entry must be the original photo of the submitting participant. Exception will be made for children from the same family whose children's costumes "go together". Only non-commercial work may be submitted (i.e., no professional photographs). Entries may not contain profanity, nudity, pornographic images, violent images, anti-competition messages, illegal material, or material that violates the rights of third parties. Entries may not include confidential information, trade secrets, trademarks or copyrighted material belonging to any person or entity other than the participant absent a suitable license or permission agreement (proof of which is required). Entries containing any forbidden matter or material otherwise deemed by Organizer to be inappropriate will be disqualified. Online entries will be deemed submitted by the authorized account holder of the e-mail address submitted at time of entry.

JUDGING: The winning entry will be selected based upon the most votes. By entering, you agree to be bound by these Official Rules, and that the decisions of the judges are final and binding in all respects. Voting will end on November 12, 2013 at 9:00 PM, and potential winners will be notified by e-mail on or before November 15, 2013. Based upon the content of submissions, Sponsor reserves the right not to select any winning submissions.

PRIZE AWARDS: Prizes will be awarded by the contributing company within sixty (60) days after winner verification. Only one prize awarded per household. No prize substitution or transfer is permitted, except that Sponsor reserves the right to substitute a prize of equal or greater value for any reason. All taxes and any other incidental expenses on Prizes are the sole responsibility of each winner. Winner names will be provided to the companies who donated the prizes, and the winner must contact the donor company to redeem prize.

GENERAL RULES & LIMITATIONS: By entering, you represent that: (i) your entry is your own original work; and (ii) you own or have the rights to convey any and all right and title in any material submitted as part of your entry into the Contest. By entering, you grant to Sponsor a non-exclusive, worldwide, royalty-free license to edit, publish, promote, republish at any time in the future and otherwise use your submission, along with your name and likeness, in any and all media for possible editorial, promotional or advertising purposes, without further permission, notice or compensation (except where prohibited by law). By participating in the Contest, you agree to release Sponsor and its parent companies, affiliates, subsidiaries, employees, directors, officers, and agents from any and all liability, claims or actions of any kind whatsoever for injuries, damages or losses to persons and property which may be sustained in connection with the receipt, ownership, possession, use, or misuse of any prize. Sponsor is not responsible for technical, hardware or software failures, or other errors or problems which may occur in connection with the Contest, whether computer, network, technical, mechanical, typographical, printing, human or otherwise, including, without limitation, errors or problems which may occur in connection with the administration of the Contest, the processing or judging of entries, the announcement of the prizes, in any Contest-related materials, or that may limit prize fulfillment or a participant's ability to enter the Contest. Sponsor reserves the right to permanently disqualify from the Contest any person it believes has intentionally violated these official rules.

WINNER IDENTITY: For the identity of the winner(s), visit www.GSOFamilies.com after November 15, 2013.

Enter this contest now, and VOTE for your favorite to win!
Email ThisBlogThis!Share to TwitterShare to FacebookShare to Pinterest