Do you remember the horrible news over Memorial Day weekend, when a pregnant Oak Ridge mother, Melissa Chambers Britt, and her 3 year old son Jaiden were killed after their pontoon boat was hit by a speedboat on High Rock Lake?

Jared Pike from Jared and Katie in the Morning on 107.5 KZL has organized and is hosting the J’s for Jaiden and Melissa Britt Charity Basketball Game on Friday, August 2nd at 7pm at Northwest Guilford High School in Greensboro, NC. The game will accomplish two goals – the first being to honor the lives of Melissa Chambers Britt and Jaiden Britt who were killed over the Memorial Day weekend when their pontoon boat was hit by a speed boat. The second is to raise money for Jaiden’s former pre-school – The Muirs Chapel Christian Playschool. Tickets/Donations are only 5 dollars at the door. Doors open at 5:30pm.

Halftime will feature a slam dunk contest featuring Wake’s LD Williams and UNC’s Will Graves and a 3-pt contest between TV News Personalities.

There will be a 50/50 raffle, silent auction and various other activities going on before and during the game. 100% of the proceeds go to The Muirs Chapel Christian Playschool. Nascar driver Kevin Harvick is donating singed memorabilia for the silent auction as well as GI Joe 2 actor Augustus Cho will play in the game, sign autographs and is donating GI Joe memorabilia for the auction. Former ACC players and Mr. Cho are available for interviews upon availability.

This is a personal friend of Jared's and he wants it to be a success. If you're able, please take the time to attend the game (the goal is to sell out the gym for the first time ever!). If you would like to contribute in other ways, please contact Jared at jared@1075kzl.com. 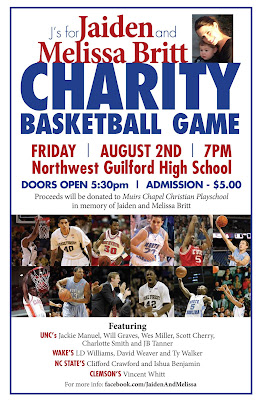